Please indicate your acceptance to our use of cookies by closing this message before continuing to use our site.
More Info
Accept Cookies
OFFICIAL UK JEWELLERS - CLICK HERE FOR STORE DETAILS
FREE UK DELIVERY - ORDERS OVER £75
90 Day Returns* - Click for Details
Finance Available* - Orders Over £275 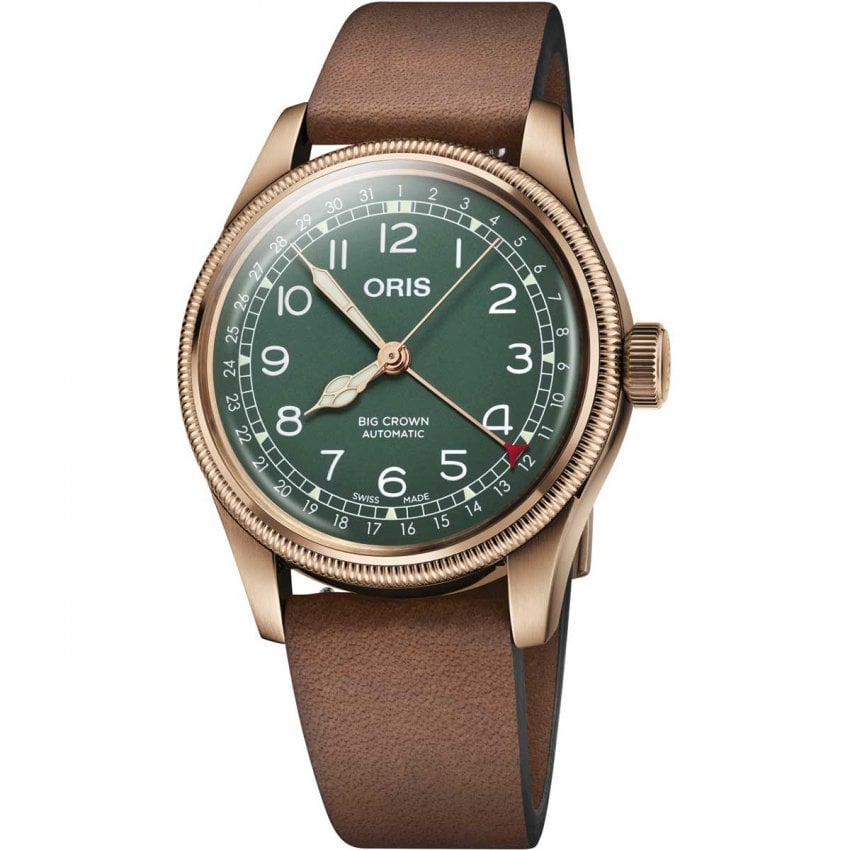 The Oris Big Crown Pointer Date has always been a style statement and a useful instrument. For its 80th anniversary, Oris announces a special bronze edition.

In 1938, Oris introduced a pioneering watch for pilots. It had an oversized crown so that glove-wearing airmen could easily adjust it, and an unusual complication – a date indicated by a central pointer hand.

The aim behind it was to create a beautiful, high-quality, reasonably priced timekeeper that would be reliable and easy to use, even in hostile conditions. Little could the independent Swiss watchmaker have known at the time that eight decades later, the Big Crown Pointer Date would not only continue to fulfil that ambition, but also that it would have become one of the most recognisable of all watch designs, an icon for the generations.

‘Designs come and go, but the Big Crown Pointer Date has endured and keeps getting stronger,’ says Oris’s Honorary Chairman, Dr Rolf Portmann, who shares his experiences of the Big Crown on page 6. ‘It’s become an Oris signature and a symbol of how strong the company’s heritage and brand are.’

To mark the 80th anniversary of this landmark watch, Oris has created the Big Crown Pointer Date 80th Anniversary Edition, a special piece with a 40mm case, fluted bezel and oversized crown cast in bronze, and a striking green dial.

Oris has chosen bronze for the case material in part because of its current popularity, but also because it’s a utilitarian material that tells the story of Oris’s industrial approach to watchmaking. Bronze patinates naturally as it oxidises, so that each watch will take on a unique finish over time. The deep green of the dial also has a natural feel, complementing the bronze case. The combination of materials and colours is symbolic of the watch’s design heritage, Oris’s rich mechanical watchmaking history, and the company’s natural location in Switzerland’s beautiful Waldenburg Valley.

A design for the ages

The original Oris Big Crown Pointer Date was a landmark watch. In the 80 years since its launch, it has played a pivotal role in Oris’s remarkable story.

No watch tells the historic tale of independent Swiss watchmaker Oris quite like the iconic Big Crown Pointer Date. It’s a potent symbol of Oris’s philosophy, and some say that without it Oris might not enjoy its current status as a leader in Swiss Made mechanical watches.

Since Oris was founded in 1904, its philosophy has always been to create watches that make sense, that serve a real purpose and that can be industrially produced to the highest standards and sold at reasonable prices. Introduced in 1938, the Big Crown Pointer Date fulfilled that timeless brief.

In the years since, it has remained in constant production, surviving wars, the advent of quartz and countless passing fashions to become Oris’s signature design.

Back in the 1930s, Oris was a fast-growing company, with seven production sites in and around the picturesque Swiss village of Hölstein, where the company is still based today. The Big Crown Pointer Date was a milestone watch for the company, introducing the pointer date function into the collection and offering pilots a genuinely useful tool.

Production of the Big Crown Pointer Date continued into the 1960s, when Oris swelled to become one of the world’s 10 largest watch brands, employing 800 people and producing 1.2 million watches and clocks a year.

The 1970s and 1980s were devastating for the watch industry, which suffered 60,000 job losses and the closure of 1,000 companies as the impact of cheap quartz movements took its toll on traditional watchmaking.

Oris suffered too, but by the mid-1980s it was resurgent. The Big Crown Pointer Date had been a collection mainstay throughout what became known as the Quartz Crisis, and when Oris came to look for a watch that would reignite interest in the company, there was only one choice – the Big Crown Pointer Date. The eternal value of its design and functionality made it the perfect vehicle. And it worked, going on to become the centrepiece of the Oris collection.

‘In the late 1980s, the Big Crown Pointer Date was put centre stage as a symbol of Oris’s heritage and longevity,’ says Oris’s co-CEO Rolf Studer. ‘It played a pivotal role in helping Oris rebuild after the troubles of the Quartz Crisis. It sums up the Oris story.’