Please indicate your acceptance to our use of cookies by closing this message before continuing to use our site.
More Info
Ok
COVID-19 Update - Website Open - Extended returns - Click for details >
FREE UK DELIVERY - ORDERS OVER £75
90 Day Returns* - Click for Details
Finance Available* - Orders Over £275 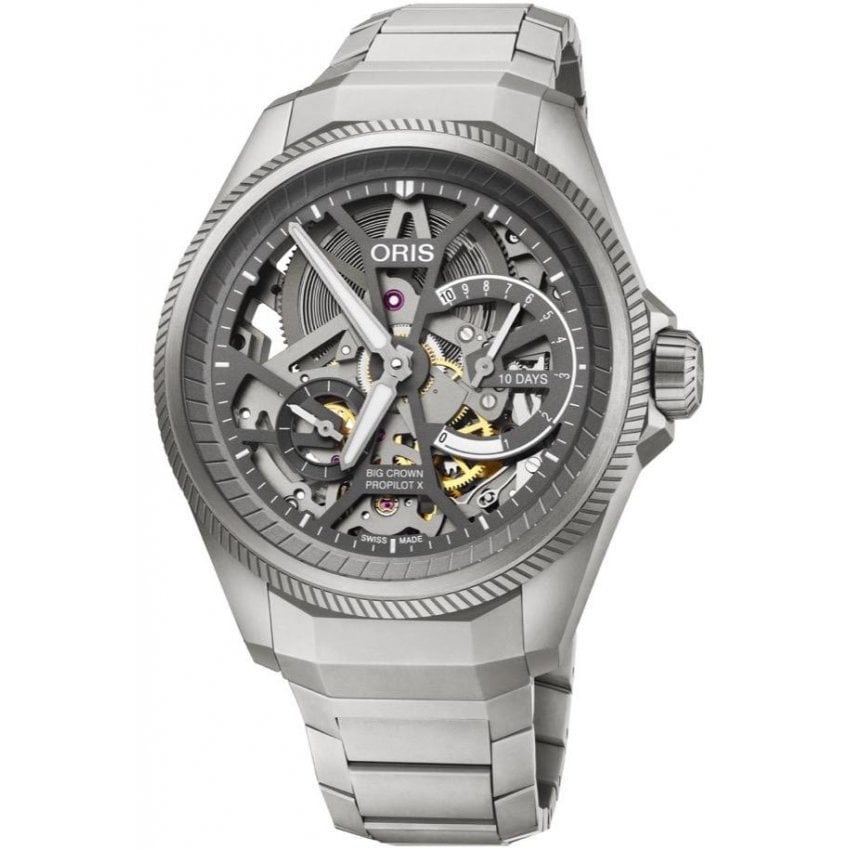 Oris’s latest watch powered by an in-house developed calibre is a landmark design. The skeletonised Calibre 115 movement opens up the 10-day power reserve and non-linear power reserve indicator to reveal how they work. It’s a contemporary take on luxury that highlights the eternal value of a beautifully crafted Swiss Made mechanical watch

Calibre 115 is a hand-wound movement operated through the watch’s single crown. When fully wound, the movement will deliver 10 days of power – most mechanical watches run for around two days. This exceptional, 240-hour power reserve is fuelled by a mainspring coiled in a single oversized barrel, visible at 12 o’clock. The power reserve is displayed through an Oris-developed and patented non-linear power reserve indicator at 3 o’clock that shows the power remaining with ever greater accuracy as the time to wind the watch approaches.

For the Big Crown ProPilot X Calibre 115, Oris’s watchmakers took the spirit of Calibre 110 and imagined a fully skeletonised Oris movement. Traditionally, skeletonisation provided a window for a watchmaker’s talents, but this movement had higher ambitions. It had to reconnect people to how things work.

That’s what makes contemporary modernism so interesting. People are longing for the time when they could understand how things work.

The Big Crown ProPilot X Calibre 115 lays bare its inner workings. Nothing is hidden. Even the barrel at 12 o’clock is skeletonised so you can see the extended mainspring. Winding the crown, you watch on as the mainspring coils tighter... and tighter... until it’s fully wound and ready to deliver 10 days of uninterrupted power.

Nothing deflects from this. There is no varnish, no unnecessary decoration. Calibre 115’s skeletonised bridges are matt grey, rather than polished or engraved. Look at the movement under a loupe and you will see the edges have not been chamfered or bevelled. Instead, they have been left in their natural state. There is nothing obscuring the essence of traditional Swiss watchmaking. It is, if you will, as nature intended.

Not that it’s old-fashioned. Inspired by the striking aesthetic of the movement, Oris’s designers created a bold, dynamic case that captured both the company’s pilot’s watch history – which began in the early 1910s and took off with a pilot’s wristwatch with a ‘big crown’ in 1917 – and the future relevance of mechanical watchmaking. It is not shy to tell its story.

The resulting brushed titanium case is equally honest. Fundamentally, its design is descended from that 1938 original, supplemented by the jet engine turbine blade motif introduced into the Big Crown ProPilot’s bezel only a few years ago.

It’s based on a traditional concept, but future-driven. It’s muscular and assured. It shows Oris’s watchmaking competence and its confidence as the Swiss watch industry prepares for a new decade.

It also explains the evolution of luxury. Luxury is no longer showy or indulgent. It’s now about appreciation of quality, time and space. At Oris, we call it casual luxury, which isn’t forced or inconsiderate. It’s measured and informed. It’s authentic.

That’s why there are no unnecessary details in the watch. No flashy colour palette. No pointless complications. It’s essential. It’s crafted. It’s alive.

Who is the Big Crown ProPilot X Calibre 115 for? The wearer of this watch is on an adventure of discovery. They want to learn more about the world and themselves. They want access to a new level of understanding. That’s what it means to Go Your Own Way.

And that’s why we say that the Oris Big Crown ProPilot X Calibre 115 is as nature intended. It is pure Oris.

Be the first to review ORIS Big Crown ProPilot X Calibre 115 Titanium Watch. Write a review
Contact us with any questions you have about this product