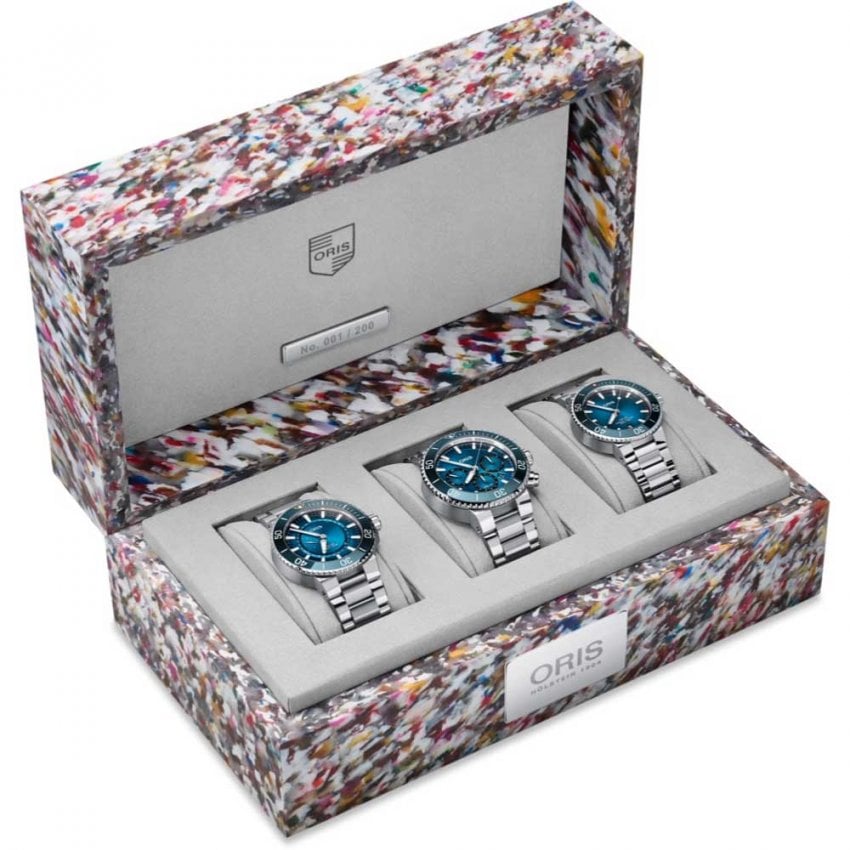 The Giant Of The Deep

The mighty blue whale is the world’s largest animal, but its future is under threat. Oris announces a partnership with the charity Whale and Dolphin Conservation aimed at protecting these majestic creatures

The blue whale is the largest animal on the planet. But after centuries of poor treatment, the species is currently listed as endangered.

Oris’s new partner, the charity Whale and Dolphin Conservation (WDC), has been funding vital research and conservation projects for 30 years. It calculates there were once around 350,000 blue whales in our oceans, but pre-industrial hunting decimated the population, and it’s thought there are now only between 10,000 and 25,000 left.

While blue whales are no longer threatened by commercial whaling, other threats such as fishing nets, environmental changes that lead to habitat loss, and the noise created by anthropogenic activities are all threats to their survival. WDC is working to conserve the blue whale by creating healthy seas and preventing deaths in nets.

WDC is involved in projects all over the world looking to combat these threats. The charity works with local authorities and tour operators off the coast of Sri Lanka where whales are at risk of vessel strikes. It also contributes to a research project on blue whales by the International Whaling Commission in the Antarctic Peninsula. WDC scientists are part of a team there collecting vital information through visual surveys – photo IDs, videotracking – and passive acoustic monitoring.

The Oris Blue Whale Limited Edition supports WDC’s work. Based on the Oris Aquis diver’s watch, it has a 45.50 mm stainless steel case water-resistant to 50 bar (500 metres), an aqua blue ceramic bezel and a graduated aqua blue dial. Inside it is an automatic Swiss Made chronograph movement, powering the first ever Aquis 3, 6 and 9 chronograph dial layout. The case back carries an embossed blue whale and the limited edition number. Only 200 pieces will be made, and the watch is only available as part of the Oris Ocean Trilogy set, which comes in a special presentation box made of recycled PET plastic.

Oris’s Oceans Project to bring change for the better aims to clean, protect and restore our
oceans through a series of limited edition watches

The Oris Ocean Trilogy is made up of three limited edition watches, each created to shine a light on a pioneering organisation and the vital work it’s doing to either clean, protect or restore the world’s oceans and the source of all life – water.

The Oris Great Barrier Reef Limited Edition III is the third watch made in support of work to conserve the world’s largest reef system. The Great Barrier Reef has been badly affected by two coral bleaching events in recent years, caused by hot summers that warm the ocean waters to levels that mean corals expel the algae inside them that provides them with food and colour. Unless water temperatures cool, the coral will die.

The Oris Clean Ocean Limited Edition marks a partnership with Pacific Garbage Screening, which is working on a concept to capture plastic waste in rivers and estuaries before it reaches the ocean and turn it into energy using a spectacular floating platform.

The Oris Ocean Trilogy supports a trio of projects vital to the health of our oceans. It’s limited to 200 pieces and is presented in a special box made using recycled PET plastic.

Oris’s mission to bring change for the better has many expressions, one of which is to clean, protect and restore the world’s oceans by supporting pioneering non-profit organisations

Oris is on a mission to bring change for the better, particularly to the world’s oceans.

The independent Swiss watch company has been supporting and championing ocean conservation programmes for years, most recently through The Oceans Project, which raises awareness and funds for pioneering agencies with game-changing visions.

The latest expression of Oris’s mission is the Blue Whale Limited Edition, the third and final piece in the Oris Ocean Trilogy, a trio of watches based on the Oris Aquis diver’s watch. The new watch is limited to 200 pieces and will only be available as part of a set delivered in a unique presentation case made of recycled PET plastic bottles.

The first two pieces in the trilogy were announced at Baselworld this year. The Great Barrier Reef Limited Edition III and the Clean Ocean Limited Edition have been made in partnership with the Reef Restoration Foundation and Pacific Garbage Screening respectively.

While those watches focused on restoring coral reefs and cleaning the world’s waters, the Blue Whale Limited Edition turns to the plight of whales, and in particular to protecting the world’s largest animal.

Even after decades of campaigning and greater protection, six out of 13 great whale species are classified as endangered. Over 1,000 whales are killed every year for commercial purposes, despite a
moratorium on commercial whaling and a ban on international trade of whale products.

It’s thought that there are now as few as 10,000 blue whales left in our oceans. These magnificent creatures sit at the top of the food chain, eat four tonnes of krill a day, and can measure up to 30 metres (100 feet) in length and weigh up to 200 tonnes, equivalent to 33 elephants. Their hearts pump 5,300 litres of blood around their bodies and their songs have been recorded at 188 decibels, more than 40 decibels louder than a jet engine.

If we can’t protect the blue whale, what hope is there for the health of our planet?

With this focus, Oris is proud to announce that the Blue Whale Limited Edition is produced in partnership with Whale and Dolphin Conservation (WDC), the leading charity devoted to the protection of whales and dolphins. ‘We’ve been very intentional about our mission to bring change for the better,’ says Oris co-chief executive Rolf Studer. ‘The environmental challenges the world faces are real, and we believe that both individuals and corporate entities have a responsibility to overcome them. The Blue Whale Limited Edition is a very special watch, produced in unusually small quantities for Oris, and the perfect symbol of the dangers facing the blue whale. We’re extremely proud to be working with Whale and Dolphin Conservation and look forward to seeing the change our partnership will bring.’

Be the first to review ORIS Save The Ocean Trilogy Limited Edition Boxset. Write a review
Contact us with any questions you have about this product