Please indicate your acceptance to our use of cookies by closing this message before continuing to use our site.
More Info
Accept Cookies
FREE UK DELIVERY - ORDERS OVER £75
90 Day Returns* - Click for Details
Finance Available* - Orders Over £275
LIMITED EDITION 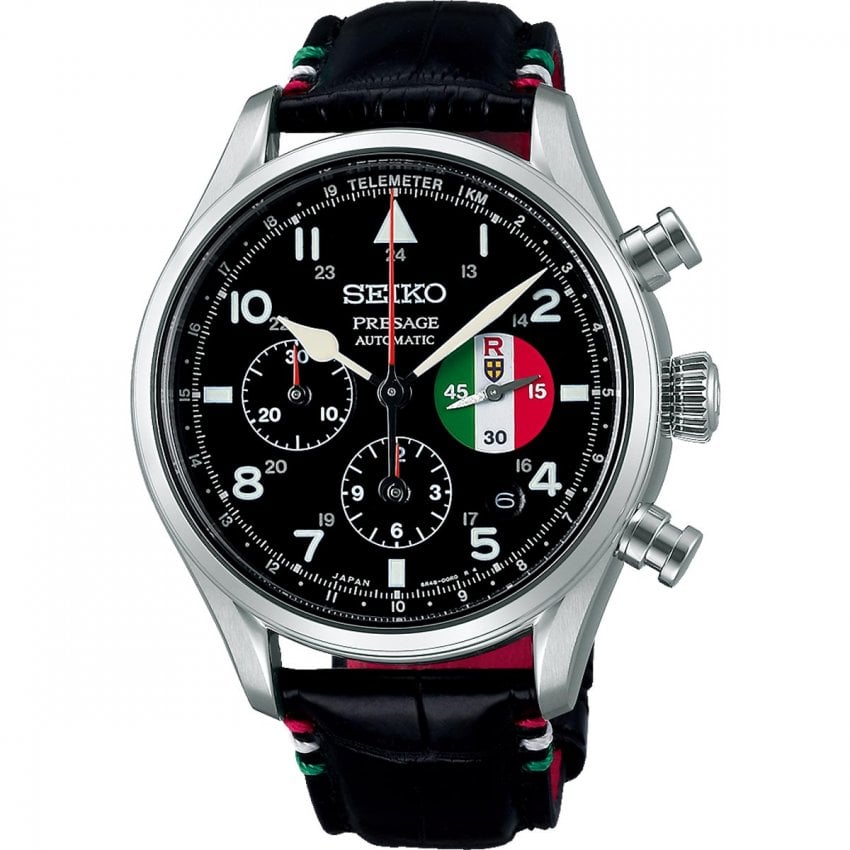 The 1992 animation film captured the hearts of audiences, bringing to life the romance of aviation’s early days with a story about an Italian fighter pilot magically transformed into the seaplane-flying pig, Porco, who fights sky bandits over the beautiful Adriatic Sea in Italy.

Key features of the watch are the aeroplane tail emblem in an Italian flag roundel on the black enamel dial, the caseback image of Porco Rosso and its engraved famous film quote 'a pig who doesn't fly is just a pig.' On the case side, the main character’s aeroplane name ‘SAVOIA S.21’ is engraved and the two leather straps issued with the watch in red and black, both showcase stitching in the colours of the Italian flag.

This model incorporates the Spring Drive movement, a watch movement pioneered by Seiko Watch Corporation’s engineers. Spring Drive generates energy like a conventional mechanical watch – with a mainspring – but combines this with an electronic regulator to deliver a superior level of precision, never requiring a battery change.

Each genuine enamel dial is truly unique, manufactured by firing at a high temperature - its individual beauty is within any 'imperfections' that the artisan methods create.

The artistry of traditional Japanese craftsmanship has been a central feature of the Presage collection since its introduction to the world in 2016. The collection’s wide variety of creations have showcased handcrafts such as Shippo enamel and, most recently, Arita porcelain, which, in combination with Seiko’s watchmaking skills, create a unique balance of beauty and technology. Today, Presage introduces two new watches that reveal a completely different and more contemporary form of Japanese artistry. These timepieces are inspired by the widely acclaimed feature-length film “Porco Rosso,” created by the famous Japanese animation studio, Studio Ghibli.

One of Studio Ghibli’s creations is “Porco Rosso,” released in 1992. The film features an early 20th-century pilot who transforms himself into a seaplane-flying pig, Porco, and makes his living chasing sky bandits over Italy and the beautiful Adriatic Sea. With its vivid animation, the film brings to life the romance of the early days of aviation.

The dial takes its inspiration from the instrument panel of the plane with clear, bold hands and numerals as well as detailed and intricate markers. The black dial is made of enamel to create the warm beauty that echoes the feel and texture of the materials used in a 1920’s aircraft.

The “R” emblem on the tail of Savoia S-21 is displayed at three o’clock position, with the same coloring as the plane’s tail.

The watches are offered in a special presentation box with an alternative strap. One strap is in black with stitching in red, white and green, and the other is in vibrant red color of the fuselage of Savoia S-21 with the same colored stitching.

The special box comes with an alternative strap and leather cloth. It also carries a message from the film’s director Hayao Miyazaki.

The watch is powered by Seiko’s most advanced chronograph caliber, 8R48, which measures elapsed time up to 12 hours and has a power reserve of 45 hours. In addition to a vertical clutch and a column wheel, it incorporates Seiko’s unique three-pointed hammer and a heart-shaped cam which ensure the perfect and instant synchronization of the hands when the chronograph is reset.

The beauty of the movement is clearly visible through the sapphire crystal case back, as is the Porco Rosso symbol. On the case back itself is engraved, in Italian, a famous quote from the film, “A pig that does not fly is just a pig.”

The crown is specially engraved with the emblem of Porco Rosso and his plane’s name graces the case.